We strongly recommend that the primary fire fighting system for a helideck should be a DIFF system (Deck Integrated Fire Fighting System). A DIFFS unit consists of a skid which processes firewater inflow to output foam or water and which is piped tomultiple nozzles which are installed flush with the helideck surface. In case of fire, these nozzles automatically telescope and spray water or foam evenly onto the deck.

We have pioneered and developed a next generation, automatically operated DIFFS unit which is approved and tested in accordance with latest civil aviation codes. This system differs from existing ones in that it is sensor activated for automatic operation, is fully fire tested in accordance with 2008/2009 standards and is available in water spray and foam spray options. This new system is described below:

The DIFFS system is designed to provide a safer and more efficient alternative to the current Fixed Monitor Systems (FMS) installed on helidecks.

The system overview below relates to a foam DIFFS unit; a water DIFFS unit is essentially similar but somewhat simpler in configuration/hardware. 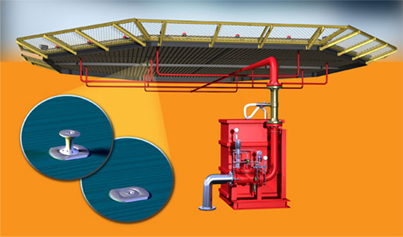 The corrosion resistant spray nozzles are spaced evenly across the helideck and sit flush with its surface to provide an optimal and even coverage of the helideck surface. The nozzles do not present any trip hazard as they protrude only a few mm above deck.

The unit is capable of being activated either manually (by way of the remote manual stations) or automatically (by way of UV/IR flame detectors). All units have multiple activation methods with the most common being automatic activation with remote, manual override buttons.

Upon detection of a fire via the UV/IR flame detectors, or on manual activation, a foam-water mixture will be released through the deluge valve-foam inductor unit, through the firewater piping network and to the pop-up spray nozzles. The foam is inducted through a turbine foam proportioner which eliminates the need for a separate foam pump and also gives a much more stable and correctly proportioned foam supply throughout the discharge period. 3% AFFF is usual but 1% solution can also be used.

The entire system has been tested and approved in accordance with UKCAA CAP437 7th edition, 2013. Live fire tests were also carried out in accordance with CAA standards and witnessed by Class and the system is fully approved for us on any helidecks following UKCAA or ICAO standards. 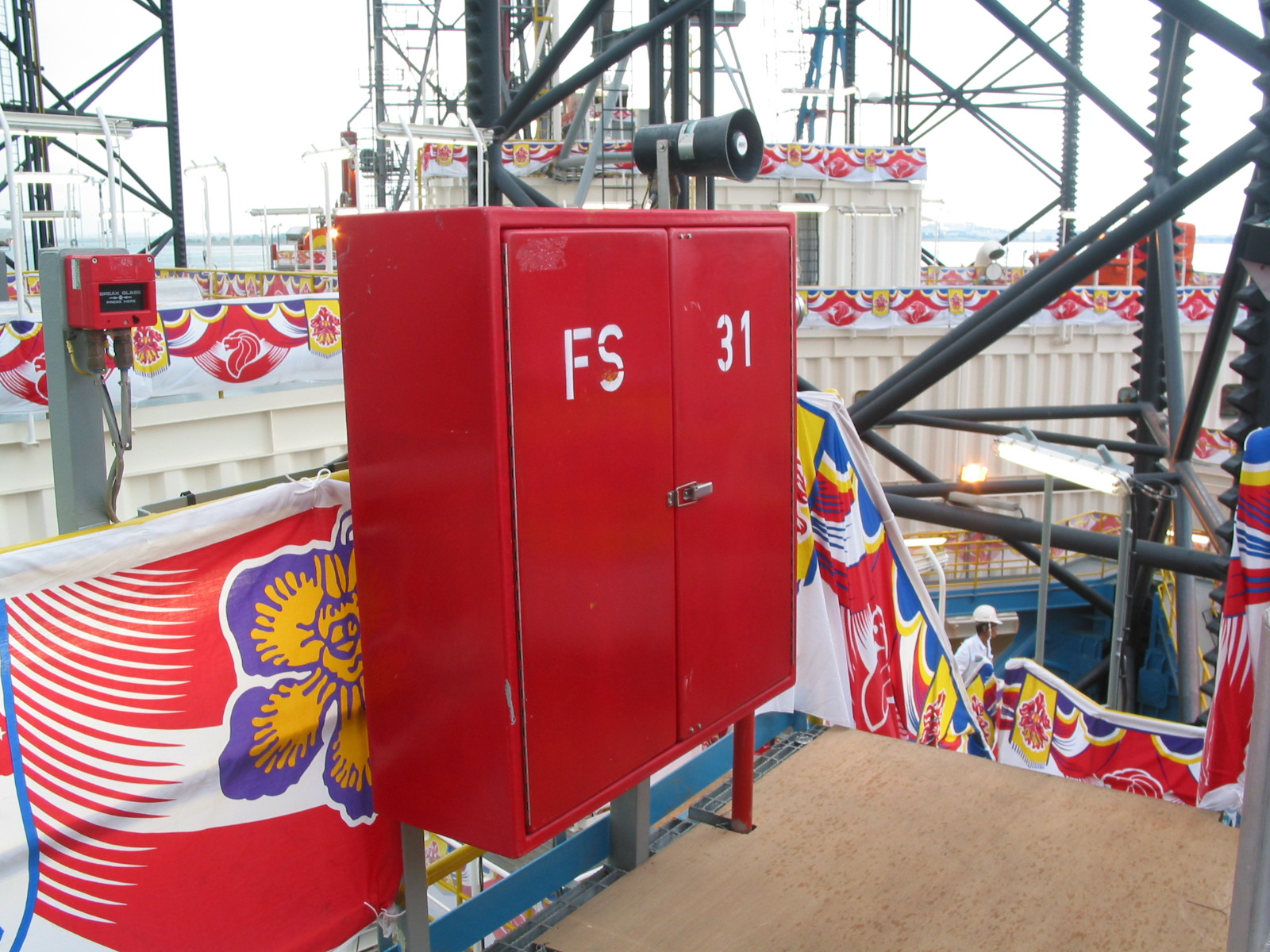 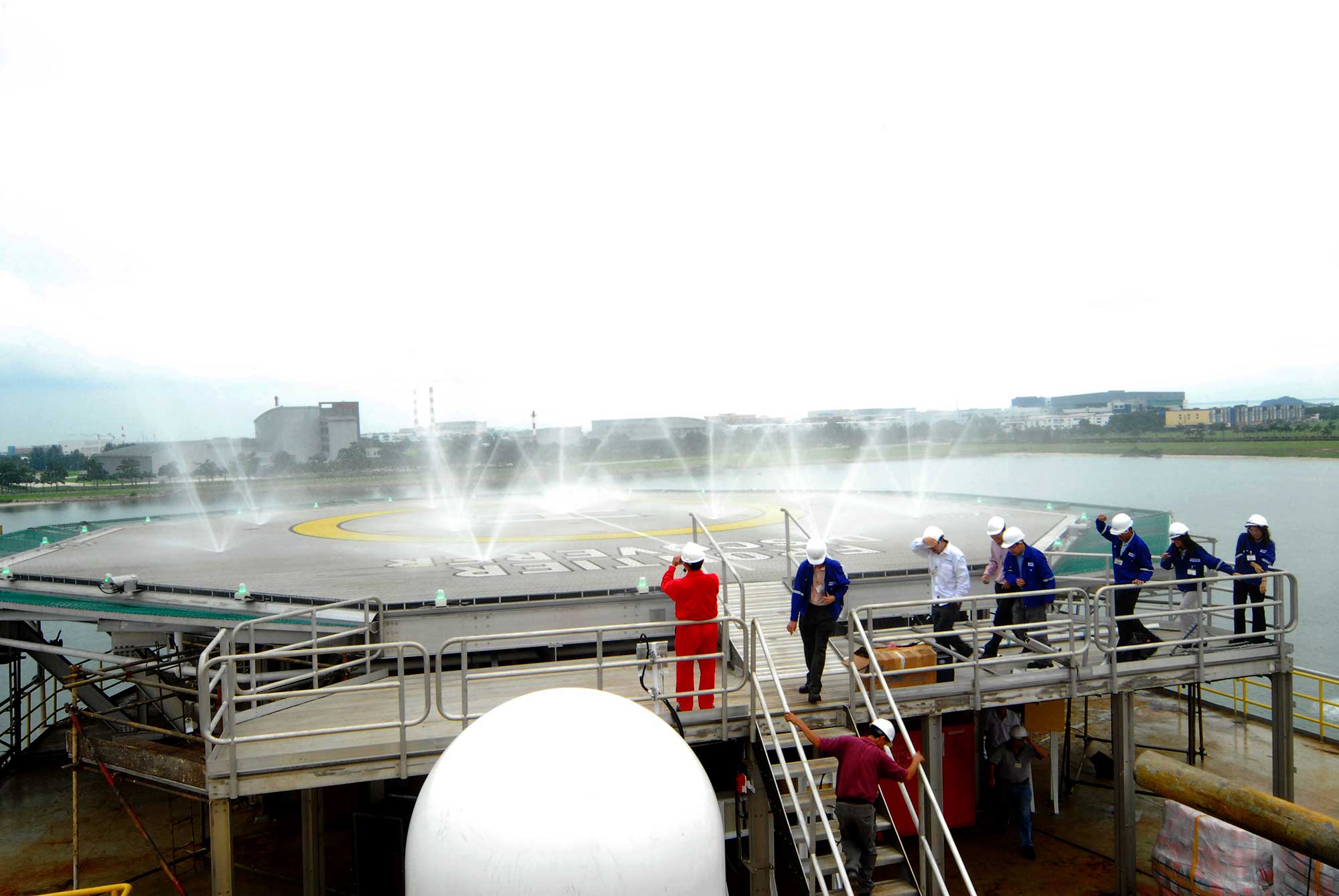 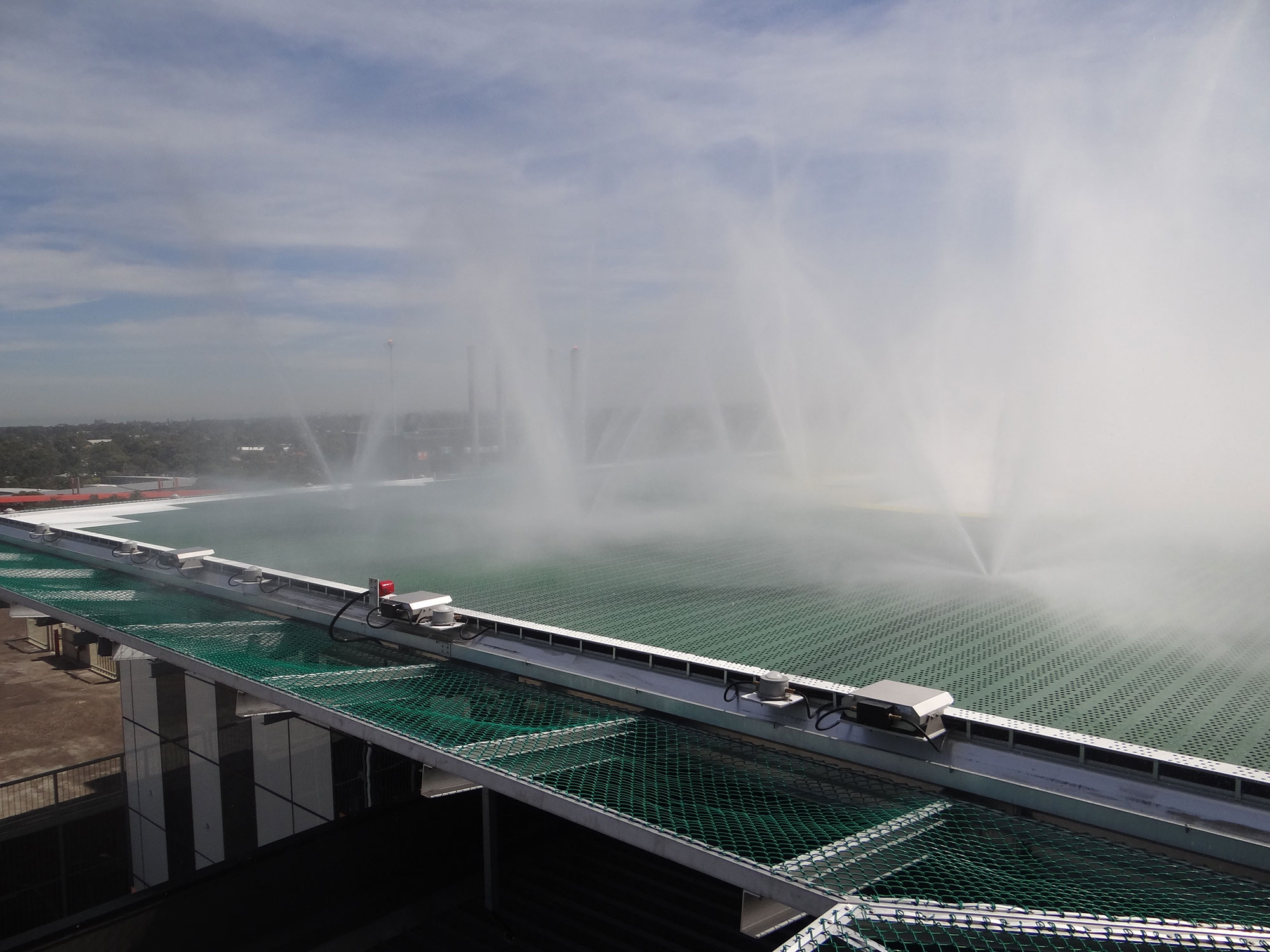 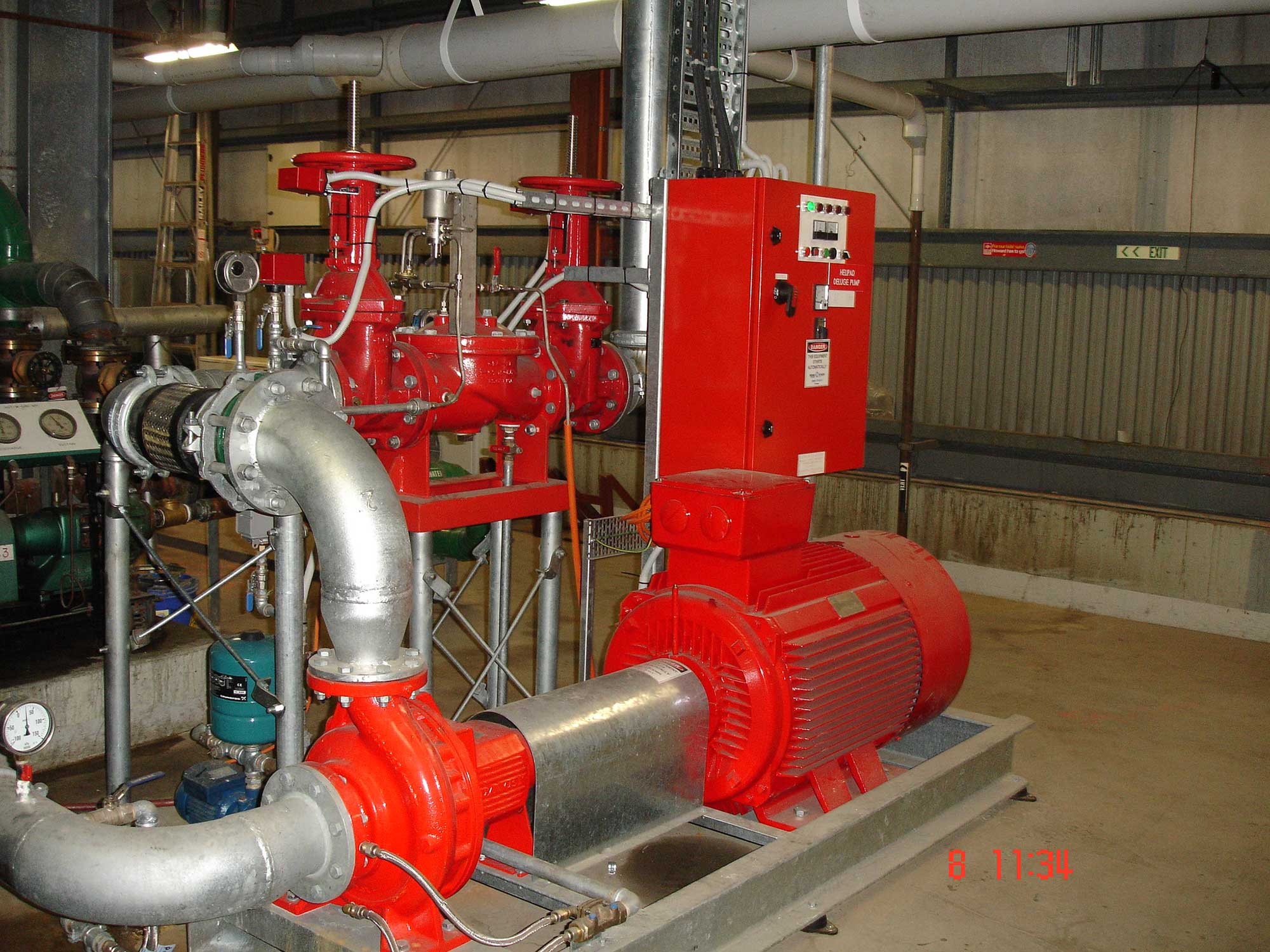 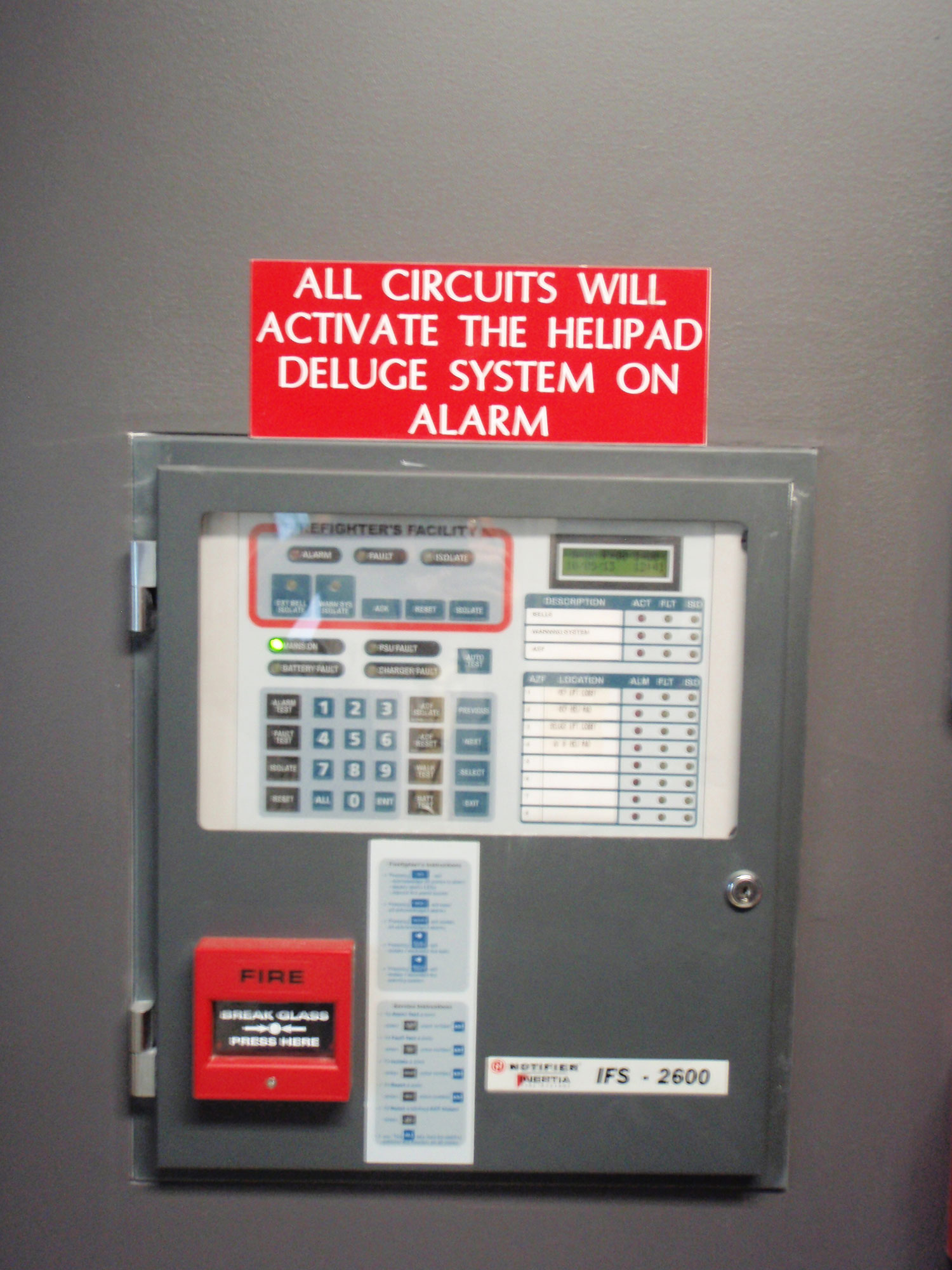 The fire demonstration was well-organized and very convincing. The design offers weight and maintainability advantages, as well as the very effective fire retardant system.

We are pleased to award you with a Special Recognition Award (Safety) Certificate for achievement in the field of HSE in the category “Aviation Fires Risk Downrated” for 2005.

…must say that I was impressed by the fire containment capabilities of the deck. The effectiveness of water in putting out the fire was clearly significant.

The staff at AOPL were extremely professionall, very efficient and timely in all their dealings with us, from negotiations to design details and construction, and right through to certification.

All the pilots at our heliport have unanimously expressed praise for this new helideck, especially the fit and finish of this product, which replaces an old rust-pront deck. We trust the high standards of design and manufacture will be upheld…

I expect any potential improvements to what is already an excellent product will only emerge as a result of operating experience. 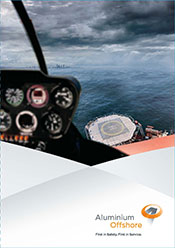 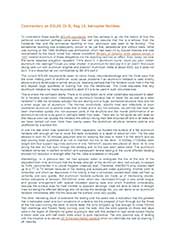 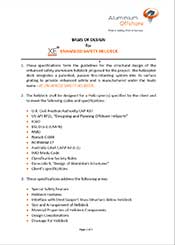 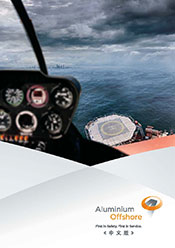